Our economy is a product of policy, and likewise, the emergence of the Big 4 (Amazon, Google, Facebook, Apple) is not just a product of technology, but of the laws in place that allow the kind of unprecedented growth, market dominance and control that we see today. There is a difference between technology changing an industry, and a few people seizing control of large, centralized power. That power comes from policy, not from technology.

Amazon has as large a market share in the entire book business as Standard Oil did in 1911, right before it was broken up into 34 companies as a result of an antitrust action brought by the federal government. Amazon now controls 75 percent of online sales of physical books, 65 percent of e-book sales, more than 40 percent of all new book sales, and about 85 percent of self-published e-book authors.

Amazon dominates the market, in almost all cases controls the entrance, and even the exit of the market, and every year controls more of the infrastructure in that market. One company cannot be the market and compete in the market. There is evidence that Amazons predatory pricing drives prices down in order to increase market share, then increases the prices and squeezes suppliers. Fordham University law student, Shaoul Sussman noted that Amazon is the largest negative cash-flow firm in the world. That not only is it "entirely rational for Amazon to engage in price predation and a long-term strategy of monopolization, but that under current corporate disclosure rules such conduct would be virtually undetectable. The negative impact of this behavior is the elimination of present and future competition."

Amazon leverages their multi-sided role as direct retailer and as a platform for retailers. Their Third Party Selling platform has essentially become it's own private government law, enforcing suspensions, assessing fees for storage and movement of product, even controlling marriages, seen as mergers, between third-party sellers. Amazon charges third-party sellers a fee to use its warehousing and fulfillment services, as well as for paid advertisements, which constitute a kind of private tax, as competitors must pay Amazon in order to compete against them, while Amazon profits off of sellers that are often their direct competitors.

Our policies regulating consumer welfare are currently prioritizing overall efficiency and output, deciding merger cases where the decisions are made on a future process, rather than the current health of both companies. And we (laypeople, small business owners, and private concerns) are locked out because we are not experts. Americans are currently starting businesses at 1/3 the rate we used to, and our policy makers should be ensuring that the market is open, that it's relatively easy to start a business, that competition is going to be fair.

Retail isn't the only small business sector suffering from the consolidation of economic power.  Big Ag is forcing the sale of family farms that have been around for generations. There are rural areas all over the country living without broadband.  Prisons are becoming more frequently solely sourced and serviced, leading to situations where prisoners spend $24 on a ten minute phone call, leading to more alienation. In the last ten years, 45% of journalists have been let go, and their is a significant correlation between news deserts and health epidemics. There are currently 1800 counties in the U.S. with no daily newspaper. Even Wal-Mart is still dominating, a company which sells over 50% of groceries in some markets. Compare that to the 16% market share A&P had in the 1930s.

Like Amazon, in the 1920s and 30s, The Great Atlantic and Pacific Tea Company (A&P) changed the way people shopped, and like Amazon, ultimately used it's size in an abusive manner. In the antitrust case of the 1940's, the company was accused of using threats, bribery, and extortion to destroy competition and control suppliers, using it's clout with key government officials to fight back at regulators calling for the monopoly to be investigated. A&P was ultimately broken up as a monopoly.

Amazon is going even further with over 300% growth in it's 3rd party marketplace over the last five years, as well as growing its web services, streaming services, distribution network, and making it virtually impossible for competitors to avoid doing business with them. One difference between A&P and Amazon is the latter's ability to pit communities against one another for tax incentives and subsidies. So while so many businesses are forced to use Amazon's wide-ranging services to stay in business, they are also funneling tax dollars to Amazon.

In 2018, Amazon spent $14.2 million on lobbying, up from it's previous high mark of $12.8 million in 2017. Amazon has ramped up spending by more than 460%, funding both democrats and republicans. To date, Amazon has procured at least $2.4 billion in subsidies from governments. And Bezose continues his $12 million dollar renovationon on his $23 million dollar Washiington DC house. He's not going anywhere.

According to the Prime Numbers study by Civic Economics, the growth of online sales has had a visible impact on American communities, as retail activity increasingly moves from commercial districts to industrial parks. The study estimates that in 2018 alone Amazon's retail sales displaced 62,410 storefronts, a 42% increase from 2016.  And even considering Amazon's massive distribution network, the net resold is a lost of 703,537 jobs nationwide.  Based on Amazon's growth the past several years, it's possible Amazon could own 65-70% of the online retail sales market by 2030 barring any kind of regulatory intervention. But Bezos knows that the majority of all retail sales are still occurring at physical stores, and he's already started experimenting with several different types of brick and mortar shops, from bookstores to groceries to department stores.

Just yesterday I wash chatting with a customer who has to close her store, and I keep hearing of more closures in Bend, and though new businesses keep popping up, it's very hard to survive. I am not an expert, by any stretch of the word. But I know the climate of small business and how hard it is to keep it going. I know there has to be more support in policy so young entrepreneurs have even the opportunity of bringing a new idea to the stage. I know it's dangerous to funnel so much money of our economy through one or two baskets. I know this issue is important, even if I don't know how to fix it.

Much of what I summarized here is from my notes at the ABA Antitrust Symposium in Washington DC, and a white paper published by ABA, which I dropped off at Representative Walden's office. If you'd like a copy to to read through, just email me as I'm happy to send it to you. I also suggest the following reading: Goliath by Matt Stoller, a startling look at how concentrated financial power and consumerism transformed American politics; and Monopolized by David Dayen, where through vignettes and vivid case studies Dayen shows how monopolies have transformed us, inverted us, and truly changed our lives, at the same time providing readers with the raw material to make monopoly a consequential issue in American life and revive a long-dormant antitrust movement (Released 06/09/2020). 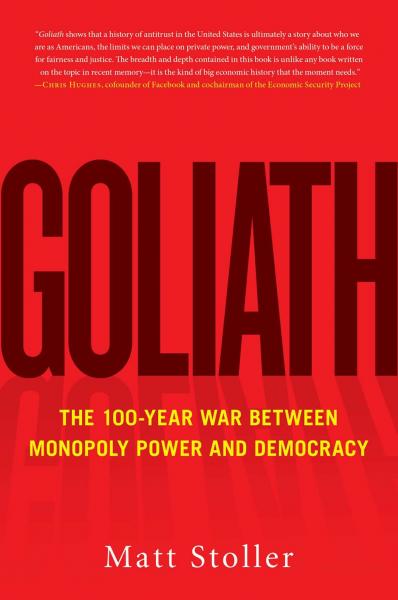